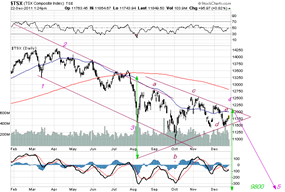 More than a year ago we contemplated the possibility of a triangle, as shown in this chart from Dec. 22 2011. Today we can update that notion again as follows; 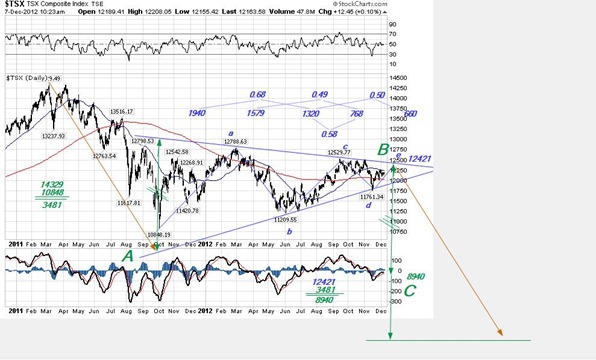 That triangle turned out to be just the midpoint of a wave a of a triangle that has been going on all this time and appears to need another week or two to complete. The typical characteristics of a triangle are comparable to a rope pull across a moat at fraternity or other juvenile games. As either party gets closer to the water it becomes more focused and stronger, causing a to and fro between the parties until one side gets dragged through the moat. The midpoint here is about 12000 and the index coils around that level making lower highs and higher lows on decreasing volume. As these are consolidation patterns the normal thing to happen is that the stock or index continues in the same direction as it entered the pattern, in this case down. Each leg within the triangle should be sub dividable in 3 waves and the legs often relate to each other by a ratio of 0.5 to 0.618, either to the preceding leg or the one before that. Using that we get 12421 as a guesstimate for the top of e. Should C equal A, we are looking at 8940, but often C is substantially longer. This is what the big picture could look like; 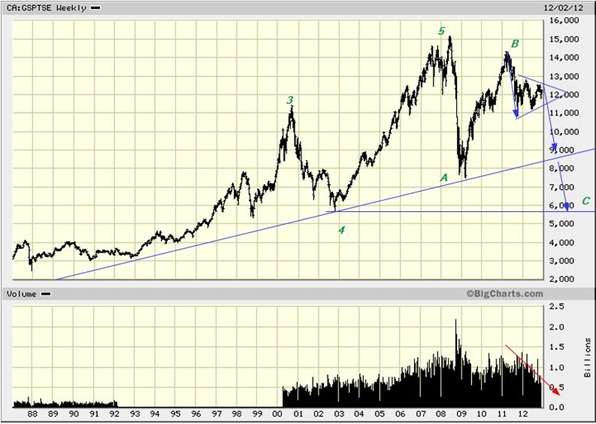 Notice that the 8940 would obtain simple by regression to the lower mean. The 4th wave of previous degree is at 6000 plus. The only fly in the ointment is that C waves should always consist of 5 separate and distinct waves which the suggested pattern would not have. We will cross that bridge at a later date ( a series of 1-2s maybe?).