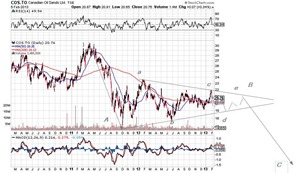 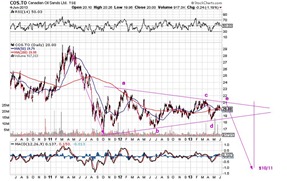 At the time, Feb. 2013 we called the triangle (wave B in an A-B-C) structure “plausible”. So far at least, that is exactly what we got so the pattern has become more plausible. It can still go slightly higher but after that you run the risk that this scenario is, in fact, the correct one. Assuming a proportionate drop in the C and A legs (about 50%), a target in the vicinity of $10.50 or so is realistic. You do not have to sell, a tight stop-loss would do equally well! The possibility of “stranded costs” ,a concept raised in this blog quite some time ago , is also becoming a more distinct reality. Unlike Ontario Hydro they will not be able to ding you the customer for that.