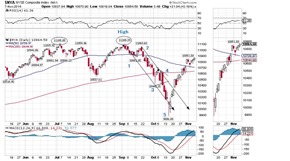 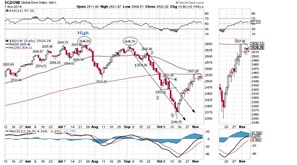 The New York Index and the Global Dow index topped out at different times, with the GDOW’s high in July and the NYA’s in early September. The differences are less than 1 single point and less than 3 points so nothing to get too excited about. But in both cases once the drop gets serious they sport very clear 5 wave moves. Unlike the DOW and the SMI no new highs have been made, in fact the GDOW has regained only about 60% so far. This is very promising for the bear case!

PS, Spoke to Mrs. Dee Lusion (see previous blog) this morning by phone. There are a few obstacles to the DMM’s plan to shorten the mile. This is of course top secret but apparently there are numerous complaints that car drivers will get inundated by unruly children asking “are we there yet?” This is because actual distances have not changed so it takes longer to go from a to b. Just like with the Fed., there are unintended consequences.