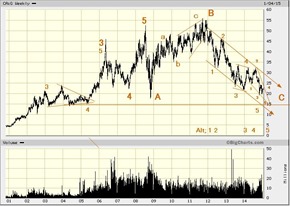 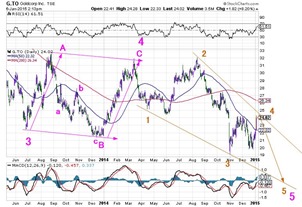 Goldcorp’s chart is different when looked at in US$$, this is perhaps due to the rapid and large changes in the currencies lately. The top in the short term chart where the number 2 is, is actually 0.11 higher than the top preceding it, technically invalidating the count as shown. In light of the near perfection of the A-B-C wave four (in purple) preceding it we have no qualms about bending the rules.

Here again we have to be alert to the possibility that the drop is not entirely over. A logical target is often wave 4 of previous degree but equally often the target is wave 4 of 3 of previous degree, in this case potentially at $15. This could be accomplished by assuming that we are presently in a wedge shaped 5th wave of C down that still needs it’s 5th wave. Alternatively we will get simple 5-wave sequence down that despite the optics may not have been done yet. Presently the stock is rebounding in what, so far at least, can only be described as a corrective wave 4. At $25+ overlap starts, equality between waves c and a of 4 occurs, and the RSI will move into overbought territory. It will also have retraced about 76% of its value should it drop to about $15.