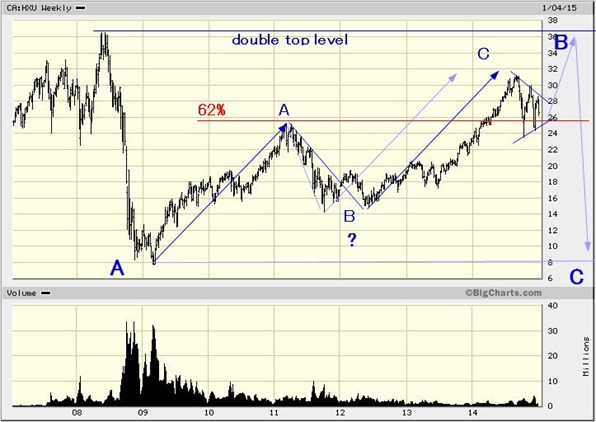 I left RBCDS involuntarily on Nov. 6 ,2008. It is hard to believe that 6 whole years have gone by. Just before I left I had put buy orders in for the HXU in fairly large numbers and for relatively large amounts, basically anyone who would listen. Those orders were no doubt cancelled before they could be filled as there was nobody left to deal with such an esoteric product as the Hor. BetaPro  leveraged 2x TSX up, which is , of course, the opposite to the HXD (U=up, D=down). The objective was the usual 62% retracement in the form of an a-b-c. We got precisely that all though in fairness we would probable have bailed at $18, not having the patience to wait two years.

After reaching the 62% mark it dutifully drops 62% to about $14. It should have continued to almost zero as Europe fell apart but the powers that be saved the day with oceans of money and other goodies. Three more years pass and the goodies just keep coming and as a result the markets experienced one of the longest rallies ever without major interruptions, that is un till Q4 of 2014. Today we are essentially where we were 4 years ago! So where do we go from here?? This may come as a shock but despite my beliefs to the contrary, it would seem that we should at least entertain the possibility of being wrong! Here are the charts; 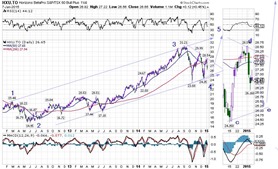 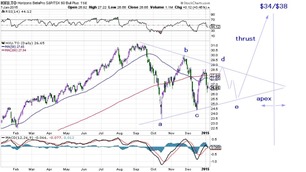 Just as with the inverse head-and-shoulder possibility on the NYA (two blogs ago) there is the equally alarming possibility that the HXU might go up. The main cause for concern is a triangle formation that seems to be forming over the past four months or so. In such a triangle all 5 legs must develop as a-b-c’s which does not seem to be the case but it is very hard to tell. Otherwise the triangle is well formed needing only c of d and all of e. This could be complete, if it happens at all, in one month or three months so the apex can shift both to the right or left. In fact the whole thing could already be complete! The triangle, as it must be, is clearly in a 4th wave position. It measures about $8 so a reasonable target once the “thrust” is done would be between $34 and $38, which would allow the HXU to double top. Time will tell!

For the record, I do not have an open mind and I cannot conceive of the TSX improving much further with what is happening to oil and the banks. So I will stick to the HXD on which I have already lost a lot, but I am aware that what should happen, does not necessarily happen which I understand is the main reason why people lose money.

The bears should keep in mind and console themselves with the thought that some triangles, at tops, are actually a series of 1-2’s which is very bearish.