Here we have Schlumberger, Halliburton and our favourite Royal Dutch. The first two have very distinct B waves whereas Royal Dutch appears to have a 5th wave. It does not matter much for the next big move, all three should move close to the bottom of the chart. This, by the way, also applies to CVX, XOM and a few others. So how is this going to happen? Here is Royal Dutch in greater detail; 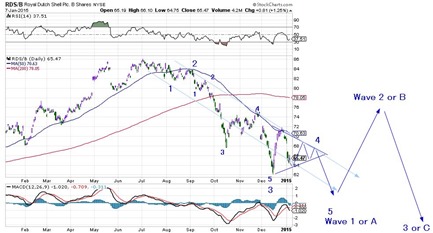 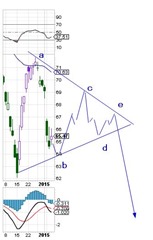 We anticipated large moves, both up and down but were surprised that they actually happened. As a result we are “stretching” our wave count so that it can reach our initial target at around $58 (see previous blogs), and then later drop much further. The recent move smell like the start of a triangle which suggests it is a 4th wave (it could also be a B-wave, but that does not fit as well but if it is then our original thought might still prove to be correct. This triangle would start one leg later and when finished the stock would climb to about $75). The thing to remember is that the drop is not over for any one of these stocks!