Then, three years ago, and now charts; 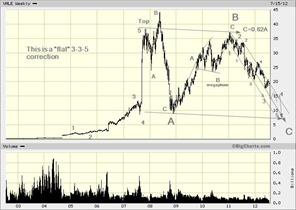 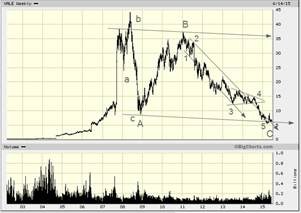 We had targeted $8 to $7, with the proviso that it could go lower. The actual low was at $5.45. The count as shown, correct or not, actually developed accordingly. Therefore we would now be buyers of this stock. 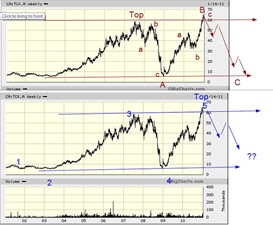 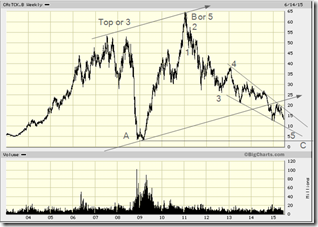 Then in this case was Jan. 4 2011 so more than 4 years ago. Now is today July 22, 2015. At the time we tried to keep an open mind with regard to the actual count. We favoured the idea that there was a big, and irregular B wave but we also toyed with the possibility that it was a 5th wave. Today the B wave idea  looks far and away to be the better fit. That implies that the C wave down should subdivide into 5 separate waves as shown in the top part of the old chart. We have to struggle to find such a 5-wave subdivision and show only one possibility using an elongated 5th wave wedge. That would target about $10. Also C waves usually make their low below the preceding A wave which would call for a price below $5. In short , unlike with Vale, there is no reason to rush in here.

One of the problems with this company is that it is run with the mindset of an M&A , Mergers and Acquisitions department of a bank with all the financial engineering that goes with it. The real world of mining simple does not play by those rules. Nor does China.

Before you buy anything, have a look at BTU and better yet WLT, Walter Energy a “pure-play” coal minor that went from $140 to 26 cents, see below; 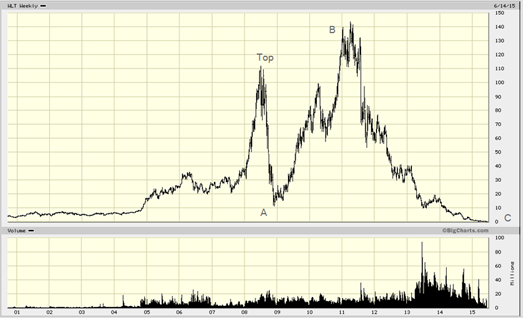