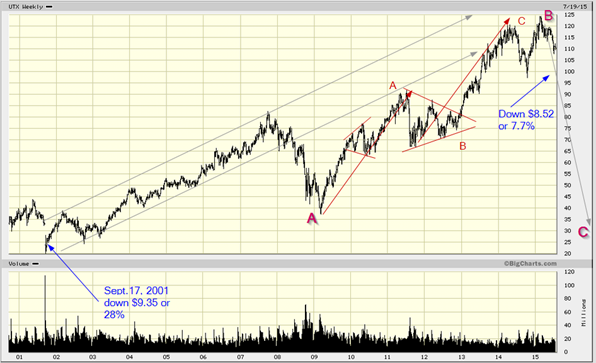 This is a conglomerate that has such companies as Otis elevators, Pratt & Whitney engines, Cessna airplanes and so on in its stable. Together with IBM this company caused a little pain in the US stock markets. It guided lower citing a drop in demand specifically from China, and that caused the worst day for this stock since Sept. 17 when the market reopened after having been closed for a few days on account of the Sept. 11 attack.

In about  5 months the stock lost $25 or 20% of it’s value which took six years to build. At this rate it would take about 2 1/2 years to get to the bottom. However it would appear that the stock is entering a third wave of some degree down and as a consequence is accelerating. The first serious support would be around $80 or so.