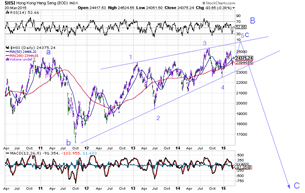 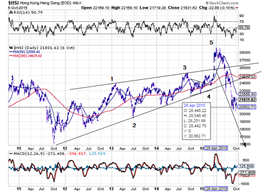 We got the peak right within ten days, but not the height as the throw-over certainly did exceed our expectations. This, of course, is your standard wedge, pennant or diagonal. It is a classic pattern and is highly reliable in predicting what lies ahead, which is down to the base, 16000, as a minimum. Why should we here in Canada care? Well for one thing Vancouver is now North America’s costliest city according to a Bloomberg article, at 2.3 mln. C$ for your average detached home, a double since 2005! Partly this is due to the fact that this port city is surrounded by mountains and consequently the usual sprawling expansion in all directions is not available. More importantly it is the Chinese connection which goes back to the days of the railways. Much of the real estate is bought with offshore funds and much of that is from HK.

Vancouver proper with a population of about 600,000 is Canada’s 8th largest municipality, Toronto weighs in at about 2.6 mln. so at least 4x as big. Furthermore the climate is more agreeable and there is an abundance of nature in the area.  So just imagine what happens when a few million people from China or Hong Kong decide to buy a pied a terre in this paradise for themselves or for their kids. There are 265,000 international students in Canada, 80,000 from China. The impact is bound to overwhelm the locals.

With stock indexes imploding, the Can.$ perhaps bottoming things may change in the near future. But first there is the J-curve effect which basically means that things initially go in the opposite direction of what one would expect because investors are trying to get in under the wire before things get seriously worse. For the Hang Sang index we expect a further drop to about 16,000 and ultimately perhaps to 8000; 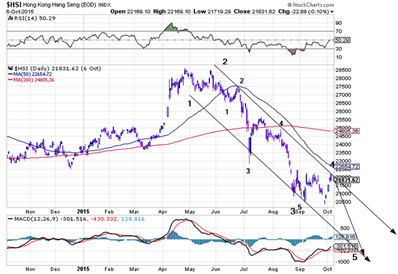