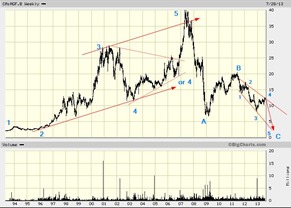 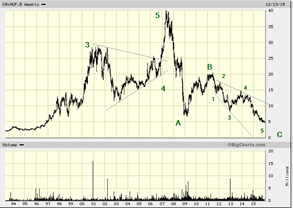 This is an A-B-C correction that is a 5-3-5 zig-zag as opposed to a 3-3-5 flat. The end result is roughly the same but the interim retracement does not even get close to the top. We had no particular target other than shown by the red arrow, but we pointed out that this mutual company that started  with a good deal of success would become almost irrelevant. Right here might be low enough as the right number of waves can be counted. A buy at $4.50 with an initial target of $6.

Note; This can also be viewed as a double zig-zag. Often the individual A and C legs within each zig-zag are , more or less, vector equal. That would be the case around $4.50 as well.

The 4 cornerstones of their approach (“Style”) are, intelligence sharing, discipline, innovative thinking and people-first. In short what every Tom, Dick and Harry does today. They do, however, have two classes of shares! As of mid-year they had about $36 bln. in assets under management. They could be a good buy for one of the larger mutual fund companies or banks with a cap. of less than $400 mln. Here is the relative performance per the G&M charts.

After energy the mutual fund sector must have been one of the worst, AGF is not alone but it is the worst.