Again the usual then, August 2015, and now charts;

The triangle gave it away and allowed us to predict the upside and the downside fairly accurately. Except that we anticipated a decent ($15 or so) bounce from about $55. We barely got half that as the stock persistently kept going south and now is approaching our ultimate target zone. Usually I draw an arrow for wave C equal as a vector to wave A just to get some idea what might happen. Invariable in the last few years that led to a much too bearish outlook as the stock would not drop at that speed or in that magnitude. So I did not draw that arrow but clearly I should have as we are getting very close to the target range.

Typically the stock should retrace to the 4th wave of previous degree, in this case either $40 or $35 (if there was a larger triangle in wave 4 of 3). The lower end of this range coincidentally also defines where there would be a Fibo.  61.8% retracement of the entire up move (about $34).

Already the dividend yield, and this will no doubt change someday, is about 8.4%. This company alone is responsible for 1/10th of all dividends paid in the UK. In the Netherlands it is the go to stock par excellence for widows and orphans. This , of course, does not mean that the stock cannot drop even further. It does mean that we should keep an eye on it to determine when this 5 wave C wave should come to an end. For the moment somewhere between , say, $39 and $36 fits the chart best; 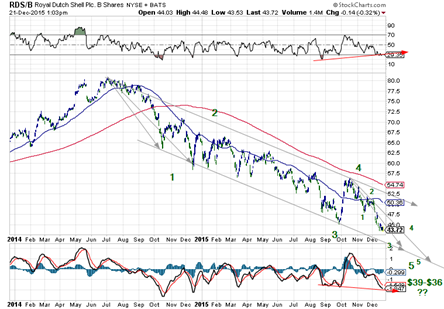 Notice that the RSI and MACD are not (yet) in synch. If you have difficulty to read the charts, just click on them and move them around.