You will recall that we were not sure if Shell had made a 5th wave into the 2014 high or simple a B-wave. This would have some bearing on what would happen next. Looking at Conoco Phillips there is absolutely no doubt that it is a B-wave so we will adopt that. We are now in C which should become 5 waves down. 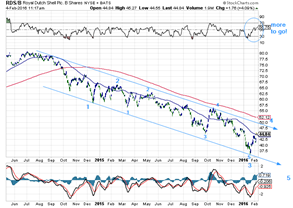 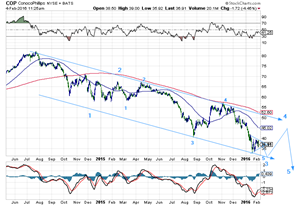 Roughly the two stocks seem to have travelled the same path and our most recent call on RDS.B, that it was a buy – see previous blog – was spot on. Today’s events raise some questions. Shell saw its profits drop by 44% which was better than expected and better than a number of other integrated oils. Conoco, on the other hand lost 3.8 bln. and announced a cut in dividends. As a result Shell went up 5/6% and Cop went down a similar percentage.

Shell may have hit the absolute bottom at $35.95 and should then go up a lot. Looking at COP it seems to be in a small triangle and still needs a bit more down. Even if it does not, this would probable be a small degree b-wave triangle that is still a correction. To accommodate this one would have to be on the alert that perhaps for both stocks we are only in wave 4 with the third wave being extended. You are up about 25% on Shell and may wish to hold on to about $48 or so. There it might be good to step aside. We will try to keep an eye on it, the RSI has more to go.

In the meantime you can tell your neighbour that you made 25% in two weeks and are hoping for 33%. If he asks how you did this tell him by reading this blog. If he then asks if it is expensive tell him it is free, at least for now.