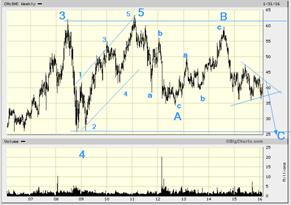 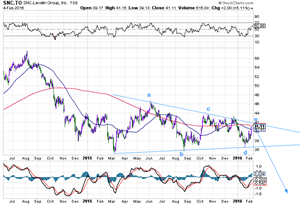 SNC has been confusing. At one point we had the B-wave top one notch to the left, where the wave 5 top is now. Then it seemed possible that a huge triangle  was forming. This has not yet been negated but a counter indicator has developed in the form of another triangle as shown on the right in detail.

If the count as shown is correct this triangle should be the 4th wave of C down, C has to be 5 waves in this count. Nevertheless it looks a lot more like a B-wave triangle. This is a possibility if from the high of early 2011 we are actually in a double zig-zag correction, that is an a-b-c X a-b-c. The only certainty that we have is that this is a triangle and it is near completing the last e leg, which cannot exceed $44. It measures about $13, or $21 if you take the 1.62 usual multiple. That gives the potential of a drop to $24/$21 depending on where e will end. This is pretty close to the 4th wave of previous degree, and would have the added advantage that both legs of the second zig-zag would be about equal.

In terms of trading – we want this blog to be, first and foremost, actionable – because most investors will not, or cannot, go short we suggest going long a put option. If it is out far enough it will not decay too much should the stock go above $44. At the very least sell it if you own it.

Asea Brown Boveri, ABB, the Swiss/Swedish engineering/construction (mainly electrical equipment) firm, has a similar chart. It is actually a little more colourful as they almost went bankrupt in 2002. Here it is; 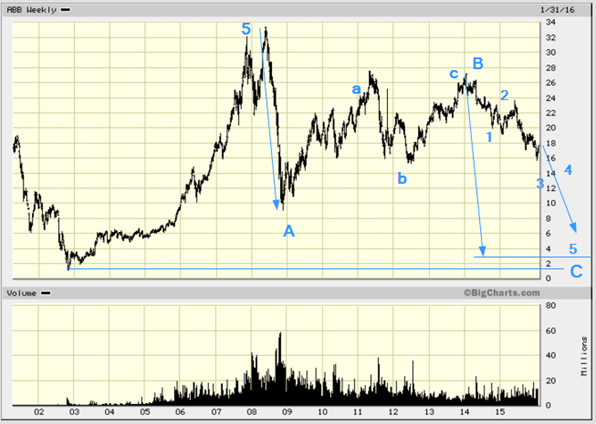 The outlook is equally somber.