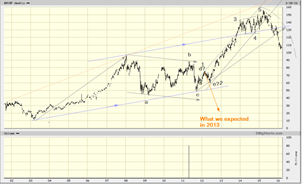 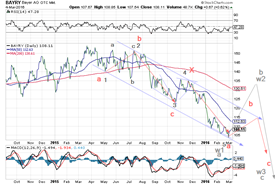 Occasionally EW, or if you prefer, I get it wrong. That is why we always recommend getting out after, say 10% or something in that order of size. It allows you to make the same mistake 10 times rather than only once!

We had identified the 4-year flat in the middle of the chart (see previous blogs), but, not fully grasping the central banks commitment to flooding the world with money, took the position that we were already on the way down in C. The stock, of course, kept rising for another three plus years and added roughly another $100 to the ADR. We do not have a longer term chart so just looking at this one it is easy to conclude that the whole thing is one very big B-wave! The alternative would be a 3, 4 and 5, with 5 and 3 vector equal.

From the short-term chart it is possible to conclude that an initial 5-wave, first wave down was completed at the $103 low (a 37% drop). Alternatively a number of variations in the form of a single a-b-c or double a-b-c X a-b-c could be in progress. In all cases a decent bounce should be expected in the near future, possible even to the $135 level. After that the target, as a minimum, is $50.

On the side I find it interesting that not that long ago the medical world recommended against the use of aspirin as this might cause ulcers. Today the story is that if you are over, say 50, you should eat the stuff like candy and at the very least keep a few at hand just in the event you get a heart attack. Take them before you dial 911 is the advice.