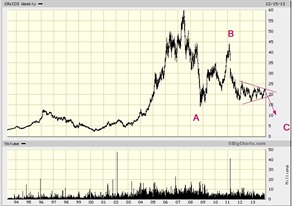 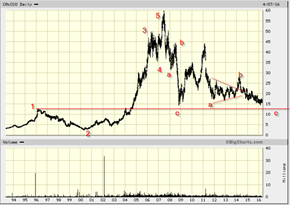 In our previous blog, now more than 2 and 1/2 years ago we expressed having a negative bias for this stock, based, in part, on the price of the stuff itself. It looked like there was a triangle wave 4, but in reality, if it even was one it would have been a minor b-wave. In retrospect we got the direction correct but not the count. This is not an A-B-C but a double zig-zag or an A-B-C X A-B-C. Our best guess now is that the rot will stop at a level approximately equal to the top of wave 1, twenty years ago.

Looking at the short-term chart a case can be made that the ideal level to buy is around $14; 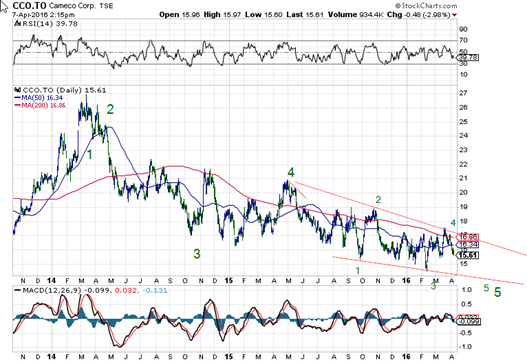 The 5th wave of C of the second A-B-C appears to be a wedge that has one more leg to complete itself. Needles to say, we have no idea what might cause an increase in demand, perhaps Trump wins and he wants to bomb the hell out of the rest of the world, perhaps the recently re-elected Mr. Wall of Saskatchewan rereads the “Joy of Monopolies” and finds economic religion once again. Whatever, at $14 this is a good buy according to my understanding of EW.