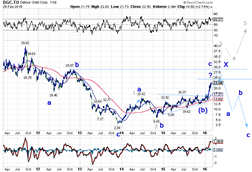 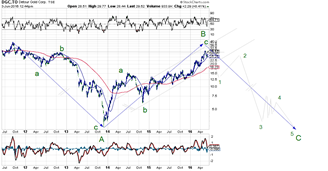 Back in Febr. of this year we expected this stock to rise to about the level of the B-wave and then crash again. Alternatively an entirely new bull market had started at the $2.50 during the last months of 2014. (One chart is arithmetic and the other semi-log!).

This stock trades out of phase with the rest of the gang. It’s low was two years earlier than the vast majority of gold stocks. Also it is now up more than 10 times the low, a performance that no other gold stock has. At the same time it is not clear why it is approaching the all time high, when gold was at $1900, now when gold is at the $1250 level.

Given the above , we are open to the notion that we are in a huge flat, 3-3-5 or A-B-C. It could stop here or climb to the all time high and then roll-over into the C leg which should take it below $2.50

The last quarter income statement shows non IFRS “cash costs”at $637 per ounce and the”all-in sustaining costs” (AISC) at $824. The AISC is expected to be $940 for the near future.  These are middle-of-the-road numbers and as far as I know do not explain the large stock market performance difference. This mine is relatively new having started production a little over a year ago. For this reason it may have attracted more attention by the investing community than would otherwise be the case. We will keep an eye on it.