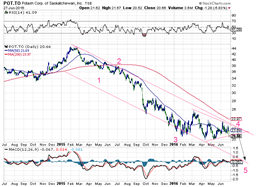 We have been neutral on this stock for a while now. Given the up and down movements over the past five months or so, without any clear progress one way or another, it is highly probable that a triangle or some other consolidation structure is forming. More often than not these are ultimately resolved in the same direction as before, that is down. A reasonable guess would be by about six dollars which would put the ultimate low at about $15 to $16. It does not have to go that far, but as we pointed out earlier, a total retracement of the bubble move up would be around $10. That is a lot of room for error so we would keep an eye on the RSI and MACD or any other technical indicator you might prefer.

For the record, buying at about $16 is buying at about one quarter of the takeover price back in 2011 or 2012. That price was then dismissed out of hand by the premier of Sask., whos government was, to a great extent, responsible for the creation of the monopoly without which this bubble would never have existed. Never mind the outrageous income received by the American CEO.