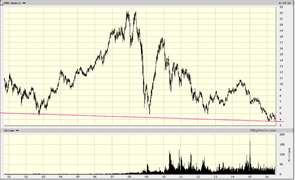 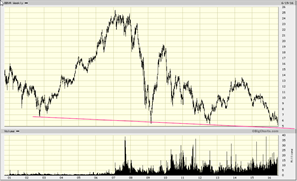 Spain is voting today. These two banks are close to the bottom so there is not a lot of room left. These banks are big, too big to fail, as the cliché goes. So, unless you are expecting the end of the world, these two banks MUST BE A BUY.

Back in 1980 or so, the Canadian federal government issued 17.75 % , extendible 5-year bonds. (straight long bonds were actually a better buy). Using the rule of 72 your money doubles in slightly more than 4 years, so this presented an opportunity to quadruple your money and then some, quite a bit of some actually, without, theoretically, taking any risk. NOBODY WOULD BUY THE STUFF. Perhaps we are at the same fork in the road. 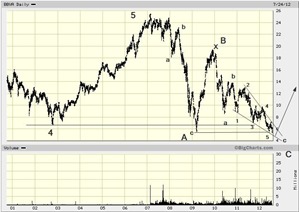 So we got that part right. Now the best count suggests that there was an a-b-c X a-b-c which is a double zigzag.  The wedge in the above chart is the end of a of the second a-b-c. A 62% relationship between the a and c of the second a-b-c suggests a price at just under $5. For BBVA that is about where the red line runs.