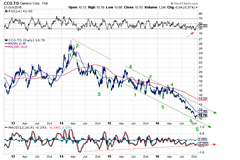 With hindsight we are changing our count to an a-b-c X a-b-c, that is a double zig-zag. As is so often the case, the two a-b-c’s are vector equal, which they are at about $10. The only fly in the ointment is that the second c, shown in the detailed chart, should subdivide into a nice 5-wave sequence. It does as shown but not without torturing this c wave. The 5th wave is very long (normal for commodity stocks!), and wave 1 is relatively small.  Otherwise the RSI and MACD do support the notion that this stock is a buy.

In any event, fundamentally (and normally we do not give much weight to this factor) it would seem to be appropriate to assume that in the future more nuclear power will be needed, despite the knee-jerk reactions in Germany and Japan. Also in a world that seems to be becoming less civil and more belligerent by the day , perhaps more of this stuff is needed.