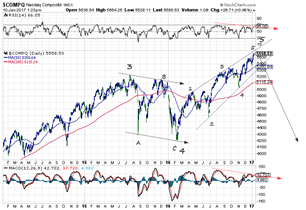 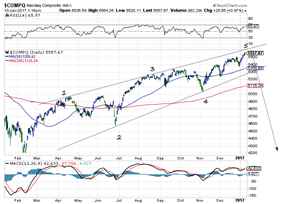 Here we have the Nasdaq Composite Index in a three year and one year timeframe. In the first chart we see a very clear a-b-c corrective move which we assume is a wave 4. That is then followed, obviously, by a wave 5. Even though it does not necessarily matter, wave 5 looks a lot like a wedge in both charts. If that is indeed the case we are almost guaranteed a return to the base of the wedge, regardless of where the ultimate high might be. That is a loss of about 25%, well worth avoiding.

We are not the least bit confident whether or not we are looking at a big B wave from the 2003, or simple a 5th wave from 2009. It does not matter all that much. Suffice it to say that we are reaching the top of this channel which we started in 1987 but probable in realty would have started earlier, perhaps even in 1975  when Xerox and Polaroid etc made their lows. This would flatten the channel considerable so we would be closer to the top than this chart shows. Similarly we have already exceeded the upper boundary of the (pink) channel starting in 2009.

Wave B or 5 is now getting close in size to the third wave. Most often the 5th wave is smaller than the third except, perhaps, for commodities but Nasdaq is not about commodities.

Typically markets peak around the time of inauguration, this is even the case when the president elect is a relatively normal person. Then during the first year the markets go down. Should the myth of Trump as the saviour of the US economy, as he seems to be regarded by some, prove to be wrong then they could go down a lot.