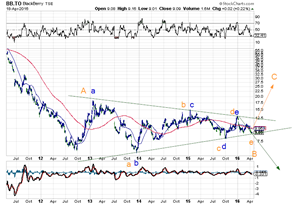 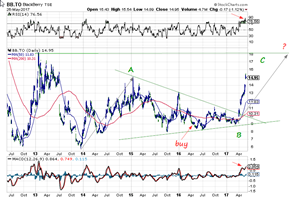 So a year ago we strongly favoured the upside ( see also big picture chart in the previous blog), but just to be safe we recommended a stop at $7.25  Had you bought at the time it would have cost about $9.25 a share to buy the stock. The stop would never have been triggered. We were going for the triangle annotated in red as our much preferred strategy. It is shown in green in the chart on the right.

Right now the B wave triangle, that is a B in an A-B-C structure appears to fit best. The potential target is, perhaps, as high as $18 but given the clear overbought situation we would not wait and would, instead, sell now. At about $15 that should translate in a gain of 38% in a single year.

The real question here is what was the low? The low in 2013 or the low in 2014. If it was the latter, a case could be made that the stock is actually in a bull market and consequently has a lot more upside potential. We have a problem embracing such a view in the face of a 38% gain.